skip to main | skip to sidebar

Been in Colorado for about a week. Met up with Ben and Simon and have been climbing at RMNP and Evans. Simon has been crushing it with sends of Silverback, Gorillas in the Mist, Super Gui, Bushpilot, and Stanley Kubric. Ben sent Handicapps in the most burly of fashions and I got sends of Bierstadt and Formula 50. Lots of pictures to come. Also, its offical now that I have actually been to Evans, but RMNP is actually a big turd pile. Kind of like Hueco, one or two good lines but a lot of hard climbs for foolfaces to finish. Off to Area D at Evans on Sunday, PSYCHED!
Posted at 8:51 PM No comments:

Yesterday Bret and I headed out to Gold Bar. We went to the Camp Serene Boulder first, a place neither of us had been to before. I flashed the V6 there, which is an amazing climb and also did the V4. However, the "V8" eluded both Bret and me and we ended up leaving to the Five Star boulder. I had done the two harder climbs there already so I decided to try and finish up a few of the tall and scary moderates I had not done before. However, I was able to complete nither the stunning V8 arete or the V6 face climb before darkness fell and we had to leave. I plan on returning for the V8 arete as soon as I return to Seattle because the climb is one of the best I have ever tried. Bret also send the 4 and 6 and worked out all the moves on Ebreosity and I think he should be able to send soon. 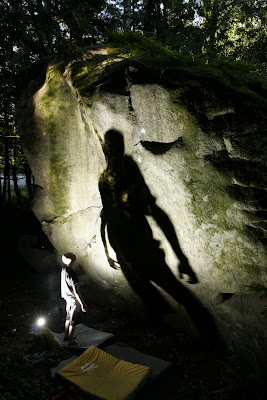 Bret under the V6 at Camp Serene 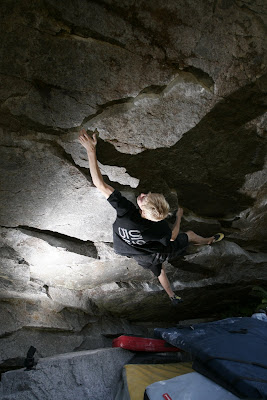 Ebreoisty with my new flash. Its a little bright here, I have not figured it all out yet. 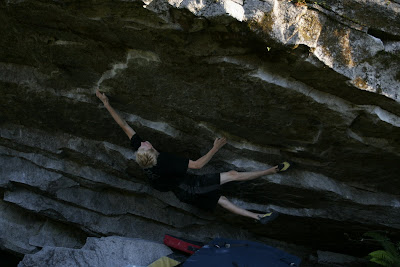 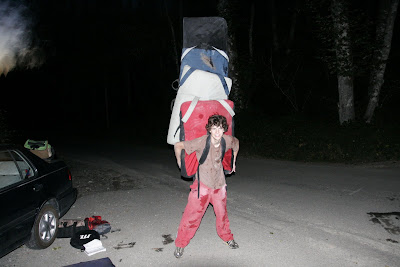 Carrying lots of pads to make landings for the two moderates I tried at Five Star. Both turn the lip at a little under 20 feet and top out at around 30 with pad uneven landings.
Posted at 6:55 PM 2 comments: 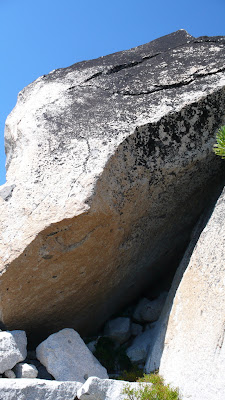 Reminds me a little of The Swarm but would be easier for sure. Some of the better rock I found up in the Enchantments. I did not try the line however because I lacked a pad and this boulder is about 25 feet tall. 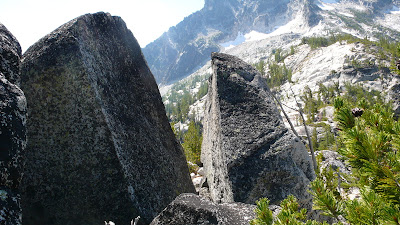 Two random boulders with lots of moss and lichen. The one on the left has a featured overhanging face about 10 feet tall. The vertical face on the right is around 15 feet tall and has some small crimps up the middle. 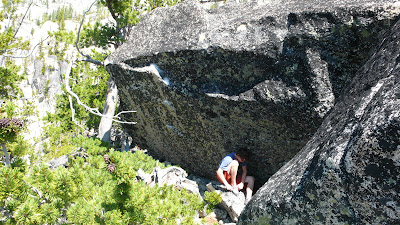 A line that I brushed and chalked up. It was short but extreamly fun with an exciting mantle given there were sharp rocks and trees below with nothing covering them. I dont have a name for it yet but it felt to be around V6, but could be easier if you had a pad and felt more confident about being ok if you fell. There is also another line up the center of this boulder on smaller but still holdable crimps. 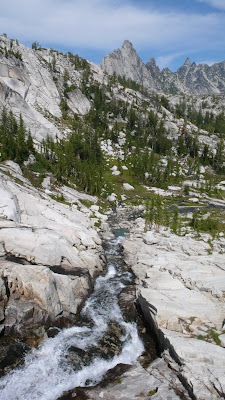 Middle Enchantment Basin. The blocks there are mostly too small to hold great lines but it is still an amazing place to hike through, no? 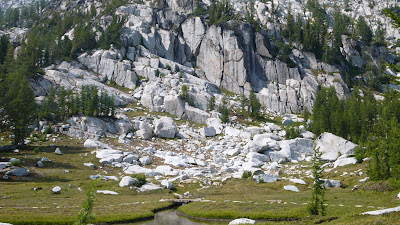 Amazing crisp white granite blocks in Upper Enchantment Basin, I did not get over to look at these close but they were of a good size to climb and many more of these small fields existed not too far from this one. 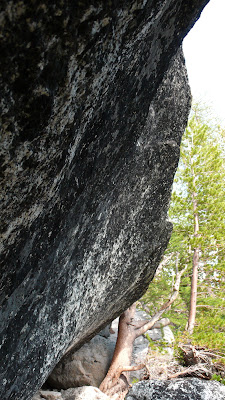 A huge Buttermilks sized bloc that had features at a jump start height but with a pretty bad landing. Many of these pictures you cannot see the smaller sized crimps because of the black lichen that covers these rocks. The features vary from each isolated area, some whole tallus fields I looked at were blank while others were covered in bomber incut crimps. 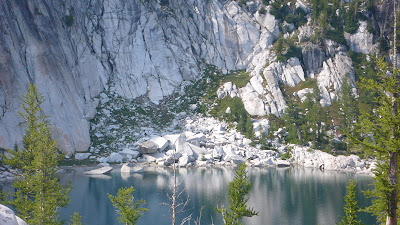 More large boulders with bad landings on the far side of Lake Viviane in the Lower Enchantment basin. I did not get a close look at these. 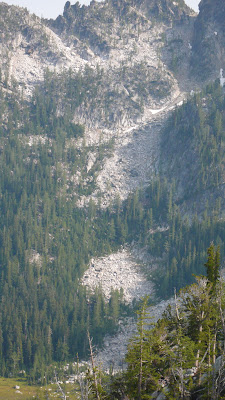 Three huge tallus fields with boulders ranging from house sized to pebbles. Did not get over to this one either but hopefully they are featured with decent landings. 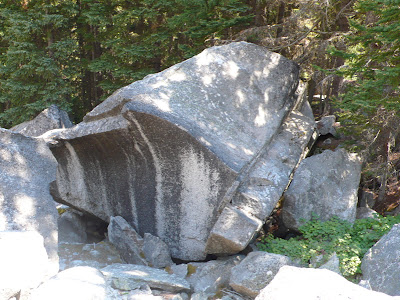 An amazing wave feature that is sadly completly void of holds between the ground and lip. 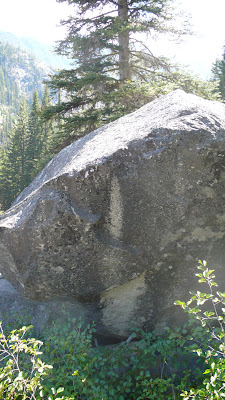 This picture and the next three below were all boulders found in the tallus that is all along Lake Nada. Many of the boulders there are either blank, too big, too small, or have too bad of landings. There boulders are all of worthwhile size and have features. 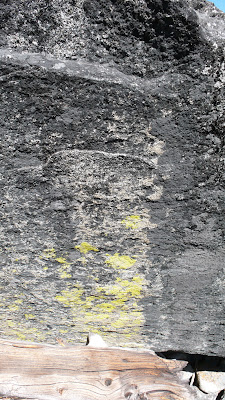 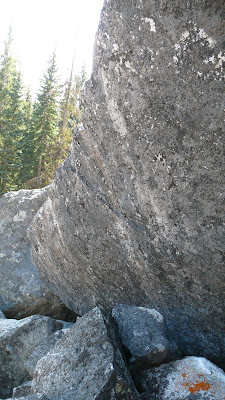 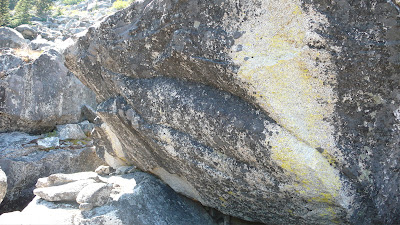 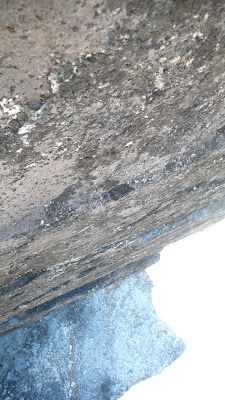 This is probably the best boulder I saw at Nada but it appeared as if someone had tried it, or maybe even done it, before. A landing had been biult and there was chalk on a few holds. This picture does not do the problem justice at all. It is a 45 degree wall that is around 12 feet high and has an amazing series of rails. This problem alone would be worth the four hour hike to try someday. 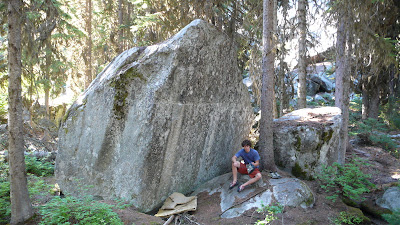 The last problem I found and completed while hiking in the Alpine Lakes. This was at the outlet side of Nada lake about 20 yards off the trail. The line goes up a series of crimps on the left end of the the just barely overhanging bloc. The landing had been slightly improved and chalk was on the first three holds so I assumed that the problem has been climbed before considering it did not seem any harder than V5 or V6.
Posted at 6:33 PM 4 comments:

I spent the last four days backpacking to the Enchantments in the Alpine Lakes Wilderness in Washington. The hike was amazing and there will be much more to be said later but before hand I stopped in Leavenworth to try a few things. I found out that Atomic Energy felt even harder in 90 degree heat, that I am still not strong enough to climb the Peephole, and that the Dali Lama is a pretty fun climb for being a move move wonder. Photos and video to come soon.
Posted at 6:29 PM No comments:

Today I made the trip to Gold Bar to try a few problems and get my pad back which was stashed up there. I tried Equinox and Twisted but both felt very hard still. I managed to do Ares though, it is an excellent arete climb up immaculate granite. Full value climbing. 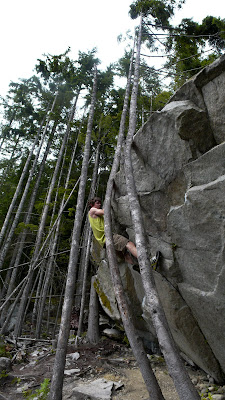 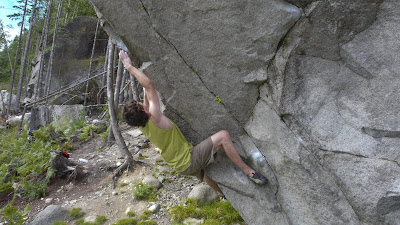 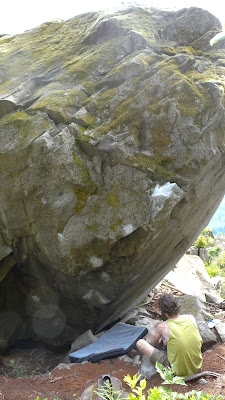 Got my new computer linked to Colorado College's servers and now I can host high quality Quicktime movies off of that. The video files are signifigantly larger so it may take a few minutes to load things.

Went to Gold Bar today with Emma. Weather was hot and sunny and most of the problem I wanted to try felt aweful. Also only having one pad did not help with the tallus landings under most problems. I did send some random V9 called Bambi but besides that it was unproductive. Check out my mad climbing skills.